I’ve been trying really hard to start writing this without jumping immediately into the food at Concho Park Marina, so we’ll get back to that in a bit. The Kayak Angler Tournament Series has been going on for a long time, but it’s been quite awhile since anyone has been to O.H. Ivie due to the extremely low water levels they’ve experienced over the last several years. When we caught wind that the lake was back up, and starting to fish pretty well, we knew this would have to go on the schedule. In my eyes, even if it posed a challenge for everyone, I think that’s a valuable experience for all anglers when you’re out on a new body of water. Bring it on!

March 12th, 24 hours until KATS Event #2 kicks off— Practice is officially open until 11:59pm that evening. I know a good handful of guys headed up late Thursday to be on the water first thing on Friday. I’ll admit, I almost loaded my PA on the ol’ Sonata just to try my luck at catching a monster. Well, 25+ winds at 7am will change a persons mind real quick! Except for the 47 psychos that decided to fish the Land of Giants on this fateful weekend. Instead, I opted for some extra rest and a mid-afternoon drive filled with music by Dr. Dog, Rage Against the Machines, and some of my other all time favorites.

After a beautiful drive through Pecan Farms, and some scenic West Texas flat lands, I finally made it to one of the hottest bass fisheries in the country! Starving, excited, and maybe just a little thirsty for some New Belgium Fat Tire’s, I raced into Concho Park Marina to settle in and get the party setup for the guys when they get off the water! Little did I know, I’d be walking into an establishment managed by quite LITERALLY the nicest, most accommodating people I have ever met. Did I mention the food was pretty good too? JB, Charlotte, Tina, and a couple other names I’ll have to get when I go back truly set the example for southern hospitality, and genuine care for other human beings. The service was top notch, and the food was nothing short of Grandma’s home cooking with love cooked into every bite. They toasted BOTH sides of my biscuit! Why? Because they know it’s the little things that create memories that last. These folks will certainly be embedded in my memory, forever. So if you ever get a chance to come check out to this lake, make sure you visit the good people at Concho Park Marina, you won’t be disappointed!

After finally settling in, the party site for the night has been setup, the YETI coolers have been filled, and now it’s time to unwind and wait for everyone to join after a long day of practice. People started to come in and out, talking tackle, and just having a great time with friends sharing a common goal. It really got me thinking, I truly have the best job and get to share some spectacular moments with an amazing group of people. From Jason’s wild college stories, Bryan’s turquoise toenails, and JR’s pocket corn on the cob. I truly can’t think of a better group of guys to hang out with and compete against. Was the New Belgium inventory getting put to the test?  Let’s just say, the boys had a damn good time out there!

Finally, it’s March 13th and it’s time for the angler’s to clock-in and get to work. As promised, I woke up at 5am and banged on Josh & JR’s door to make sure these hooligans didn’t miss kick off. Like any seasoned veterans, they were already gone and ready to go smash on bigs. So I made my rounds, wished all of the people launching from Concho good luck, and B-lined it to the Marina to grab some fresh breakfast tacos. Bacon, Sausage, Potato, you know… the works. With everything we could possibly need, Jason and I headed to Elm Creek where most everyone seemed to be launching from. Of course I had to get a peek at a few of those starting lineups you guys had, and I gotta say, I saw maybe two kayaks that did NOT have an Alabama Rig tied on. Those few anglers may or may not have been the ones to place Top 10.

6:00am, my favorite part of the tournament, and we all know this well— the site of 40+ kayaks lighting up the night sky as they race to the best spots on the pond gets me so amped up. I knew we were in for a smash fest, and a smash fest we got. Jason and I really wanted to get some quality footage of our anglers to showcase exactly what y’all can do, and Jason hit the nail on the head. We traveled a good few miles with ease thanks to Texas Power Paddle and their game changing electric motor system. This thing moves a lot of water and made chasing down anglers, enjoying the scenery, and cracking a few jokes along the way so much easier. Originally, the weather was supposed to be blowing 20+ winds with rain starting at around 7am. Sounds like a normal KATS event, right? But the fishing gods blessed us with a picture perfect morning in most areas. Light breeze, overcast, and maybe a little mist in the air. Anyone else thinking topwater MAGIC is about to go down? Me too. 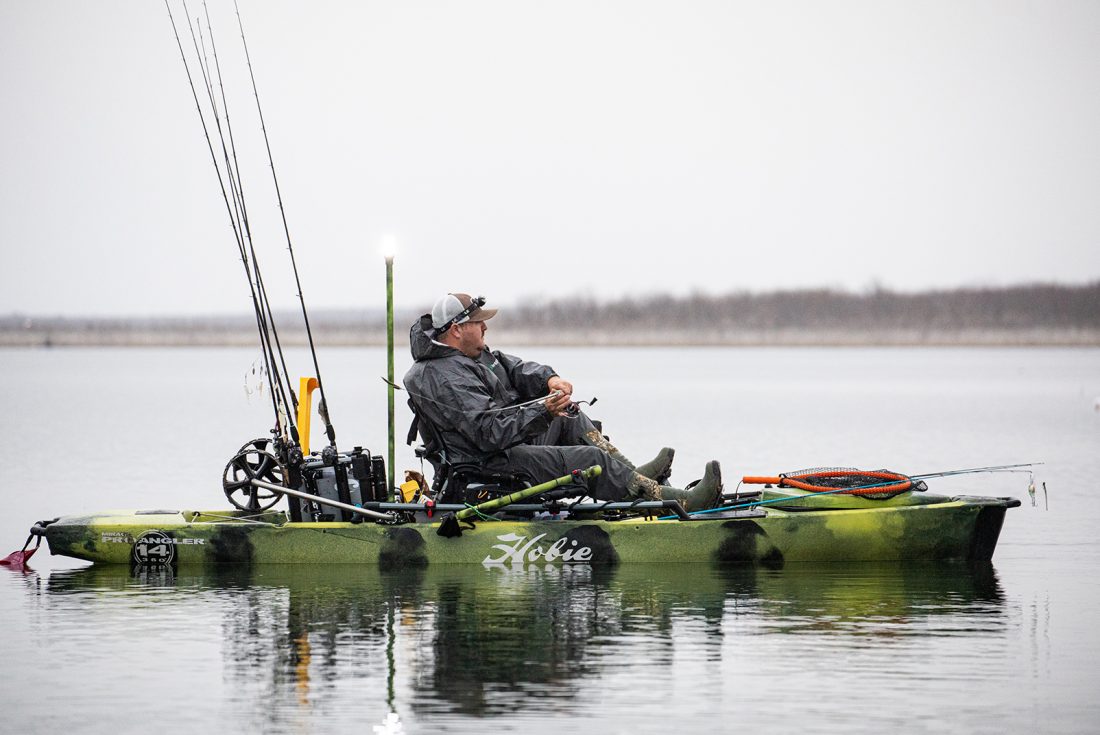 After a few hours of filming, it was time to head back and sneak in an hour of sleep before the onslaught of photo submissions started piling in. Turns out that “hour” stretched a little further than expected, but luckily Adam Estlack and Tyler Howell saved the day when they woke me up to submit manually around 11am. To my surprise, these were the only photos submitted so far. I knew this was not a good sign as most of these anglers catch a limit within the first couple of hours. The service has officially been upgraded to NON-EXISTENT. The onslaught has yet to begin and I knew I was in for some fun as we got closer to the deadline. At exactly 3:05pm, the party had started for me. Waves of 20, then 30+ photos just kept coming in at once. I think I had the only usable spot of wifi within 100 miles, so of course I let the guys come up and submit fish as needed. Well, the fun just never seemed to die down. In the middle of my busiest time, Roger Calzadilla had come up to me with an 11.75 pound freak of a fish that I originally disqualified for crossing the cut off line on the tail. He was upset, and I felt so bad because that’s the worst part of this job. But I had to stick to my decision. He submitted a protest on the call before the deadline, but I could not honor that process given that I had 80 more fish left to judge, and the weigh-in was supposed to start in 10 minutes. I knew I would have to review this once I was able to clear my head and speak to some of the KGB members. What some people don’t understand about this position, is there are more people than just your friends to take care of. People drive several hours, and spend lots of time away from family for these events so it’s always my concern to get the fish judged accurately, and get the weigh-in started ASAP so that we can get everyone home safely and in a timely manner. Well let’s just say I missed that goal by a mile due to every setback you could possibly imagine as a Tournament Director. But, that’s what I’m here for and I wouldn’t want to do it for any other group of people! You all are truly the best and I appreciate everyone for the patience. Luckily, it seemed most people were happy thanks to the surplus of Fat Tire beers, and awesome raffle prizes provided by Power Pole, NRS, YakAttack, Berley Pro, and many more. I can’t put into words how relieved I was to finally announce our winners and congratulate these people that I like to call friends. Congratulations to Tyler Howell, Armanzo Saucedo, Aaron Spry, Adam Estlack, and the rest of the hammers that managed to put on a show. It’s mind boggling that 96.75” couldn’t even crack a Top 5 finish. What a day to go out and catch some fish. After wrapping up the event, I made the call to stay another night and relax my mind. Jason and I had Jacob Moeller with us for the night, and to say we learned something about fishing would be an understatement. If anyone has had the chance to talk to this guy, you know right away that he is arguably the most knowledgable, and hard working angler you’ve ever met. The dude is a fishing encyclopedia and blew our minds with the information he had. Thank you for the good times, Jake. I’m looking forward to the next hang out! After the first good nights sleep of the entire weekend, it was time for one more stop at the Marina for some home cooking. If you’ve never fought the urge to have a double bacon cheeseburger in the morning, go have one of these and then come talk to me. Oh yeah, that’s when a gentleman comes walking in with a 13.77 pound GIANT. It ended up being the 600th fish in the Toyota Share Lunker Program with Texas Parks and Wildlife, which won him a brand new Toyota truck!I have never seen a bass that big in real life. This truly is the Land of Giants and it’s scary to think that there’s bigger ones in the pond. Un-freaking-real. I couldn’t spend another second away from my kayak; it was time to GO! After another three and half hour drive, I finally got home and managed to settle down. It was time to investigate, and accept the fact that I made a mistake on Saturday. After some long talks with the KGB members, it was decided that Roger’s fish was absolutely acceptable and he should be crowned with Big Bass for this event. I spoke to Ramiro Perez who was nothing but a class-act during the whole process. We agreed on my decision, and it was time to contact Roger to give him the good news.

Monday morning I made the official announcement and while some may have been upset, I know it was the right call and it seemed most of the anglers involved or not, were very pleased with the decision. At the end of the day, my only concern is that our anglers are taken care of as we know this would not be possible without the support from our excellent group of anglers. Thank you very much for the kind words and support from all of you. It was a stressful weekend to say the least and you guys made it much more enjoyable once it was all said and done. With that being said, I am so excited to get the ball rolling for Fayette County Reservoir on April 17th. Get your crank baits ready and let’s have a time! Thank you for all the support and I will see y’all out there!

“Navigating My Kayak Through Quarantine”